Starting with “Saving Private Ryan” and “The Bourne Identity,” having jumpy action scenes has been one way to make action stand out. This can be effective when going for a hyper-realistic effect, as in those movies. It can also have a real horror movie feel to it.

But if you want to get the jumpy look, you can set the shutter speed to something faster. Or so I’ve read. Time to test it.

In the following video, you’ll note the shutter speed in the lower left corner of the frame.  I started with the slowest shutter speed my camera would allow and moved up from there.  Normally, I’d be shooting at 1/50 of a second: consider that the baseline.

Sure enough, the higher the shutter speed, the jumpier it looks.  With the speed set to 1/50, it looks fairly normal.  By the time I get up to 1/400, it gets awfully jumpy.

(Note: to do this, I had to increase the ISO as I decreased the shutter speed.  Basic exposure triangle stuff.  The aperture is set to F2.8 for all of this.  This is done with a focal length of 28mm on a Canon 5D Mark III.)

Why this effect?  Let’s look at individual frames, the first taken from the video at the 1/50 shutter speed, the second at 1/400. 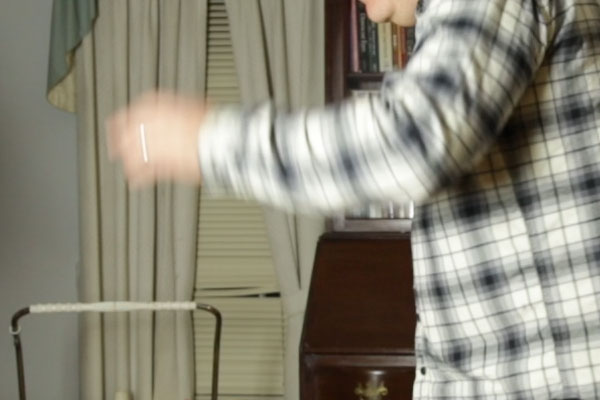 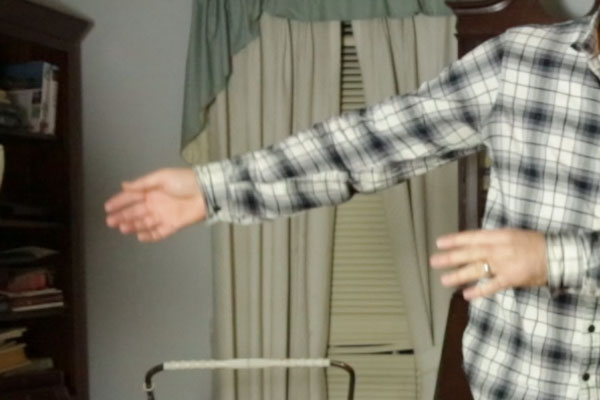 These were both taken when swinging my arms around.  Note that the 1/50 shot shows distinct motion blur, while there’s no real motion blur on the 1/400 shot.  (The 1/400 is a bit blurry, but I’m pretty sure that’s because I did not have sharp focus.)  It’s not surprising that a slower shutter speed, you can see motion.  But the lack of motion blur in the 1/400 shot results in the jumpy video.

So why is that?  Actually, it’s because that’s what we’re used to seeing.  Ever since movies have been made, they’ve been setting the shutter speed on the cameras to be roughly half of the frame rate.  In effect, the camera was recording images only half the time.  From all those years of watching all those movies, we’ve come to expect that the motion blur associated with these shutter speeds is normal.  When that blur is removed, things look strange – jumpy.

In any event, it’s an interesting effect, and one that I’ll keep in mind the next time I shoot an action sequence.  Had this little visual tool been in my bag of tricks at the time, I might have used it in some of the murder sequences in “Quietus.”