Julie and I went for a walk on Friday, January 22, just as the first flakes of winter storm Jonas started to fall. It was expected to be historic, and the Washington Post had already dubbed it “Snowzilla.” We were contemplating how to spend a snowed-in weekend, and at some point I decided that it might be fun to make a video blog tracking the course of the storm. Even better – make it a blog tracking my gradual descent into a madness driven by cabin fever, a tribute to “The Shining,” one of Julie’s favorite movies.

At that point, I had only vague ideas of how the story would go.  I knew things were going to go dark, but I didn’t know what was going to happen beyond that.  I thought it might end with me feasting on Julie’s leg, but I wasn’t sure. She even agreed to be filmed, as long as she didn’t have to talk or move. Julie doesn’t much like being in front of a camera.  But I still didn’t know for sure that would be the ending, and I’d never made something where I didn’t know what the ending would be.

We got home and I started arranging my home office to be a set. It involved a lot of cleanup, going from this: 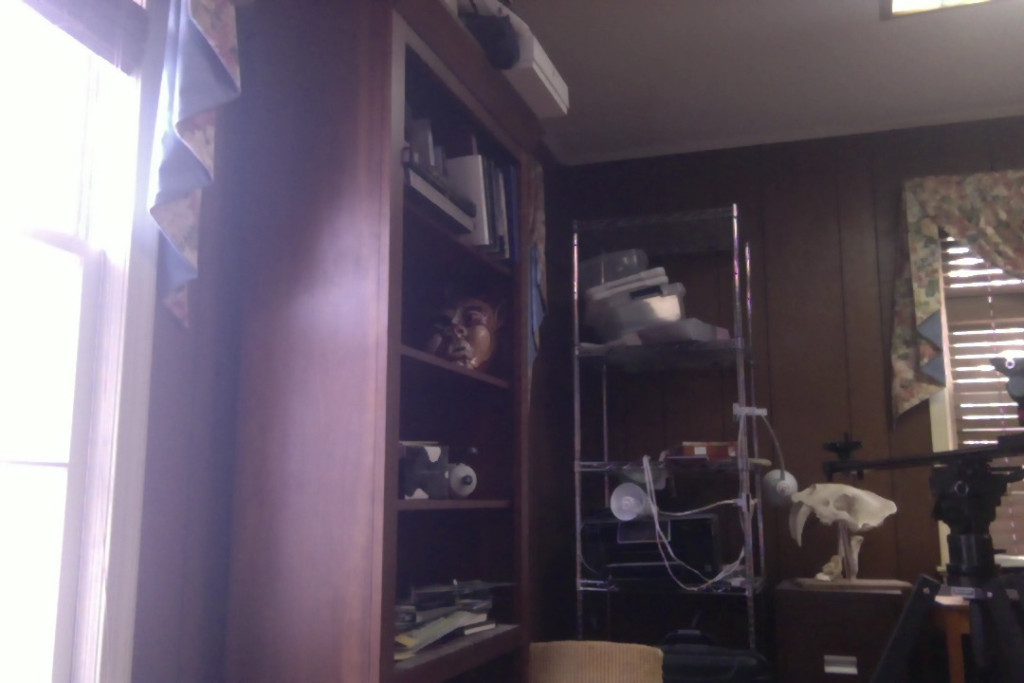 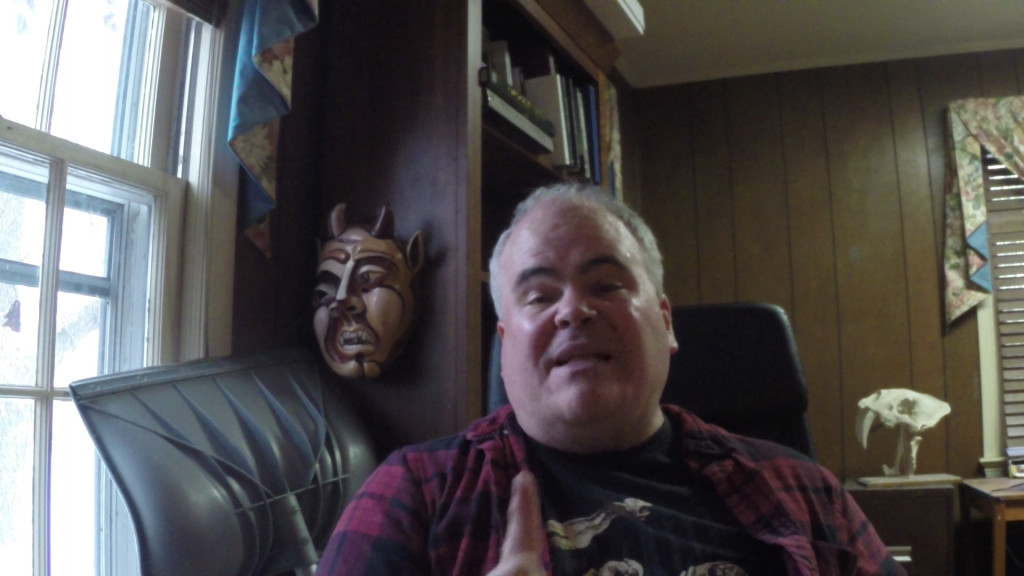 I wanted to feature the snow shovel, the demonic-looking mask that I bought in Venice last year, and the skull in the background.  The shovel was going to become a plot element.  The other two were meant as foreshadowing.  Everything else had to be cleared away to avoid distraction.

Friday’s three episodes were all fairly cheery, though I did show signs of what would come.  A bit of excessive annoyance at the neighbors.  A discussion of Smudge, the insane cat that loves me, white like the driven snow, who showed up with an unaccounted-for blood-red spot recently.  (Actually, we know where he got the red spot: one day he dipped a paw into some of Julie’s red paint and it was days before it rubbed off.)  All bits of foreshadowing, suggesting darker things to come.

And one more thing: in every episode, at some point I said of Julie that, “She’s the best.”  As the episodes progressed, that would start having different meanings.  A variant of it was the last line of the last episode.

An odd thing was happening.  I had been putting the episodes up on Facebook as I made them and they were getting lots of likes and comments.  People seemed to like my warm and cheerful presence.  They were responding.

Which led to my first dilemma.  Should I keep with the original plan and take the story dark, or should I play it straight?  It was a tough decision, but I decided that I had to tell the story I had to tell.  So dark it was.

Saturday morning’s first episode was where, in the video, I first lost my temper.  I blew my stack when I found some yellow snow on my front yard (yellow snow that I had put there myself – it was water and pineapple jello).

That was also the toughest shot to get for one reason: I wanted it to show me walking across the snow in my front yard for the first time, but that meant the snow had to have no footsteps in it.  Which in turn meant we had to get it in one take.  Not an easy challenge, when we had little preparation.  And Julie has many talents, but she’s not the world’s most skilled camera operator.

I was occasionally turning my head away from the camera and giving Julie direction, between giving my lines.  Not the easiest thing I’ve ever done – directing and acting, and largely improvising the dialog, and having to get it all in one take.  But it came together, and I think it did a good job of pivoting the piece into some darker territory.

Even better: when I went out with a camera to get some b-roll, there was a woman walking two dogs.  And one had left a real yellow spot in front of my house.  I grabbed some footage and worked it in later.

The next few episodes got darker still even as the storm got worse.  People on Facebook were starting to realize that this was not entirely real.  And I was riffing off their comments in episodes.  Fun stuff, interacting in real time like that.

On Saturday night, I had a problem: I didn’t know how the piece was going to end.  I had decided that me eating Julie would be too obvious.  It needed a twist.  I wanted to end with Julie on camera, with a glint of madness in her eyes, having just killed me.  But as I said, Julie does not like being in front of a camera, and acting like a madwoman was more than she was willing to do.

But by Sunday morning, I had figured out the ending.  Just three more episodes and we’d hit the end.

Meanwhile, I was having fun with lighting.  I was particularly proud of this shot, done late on Saturday night: 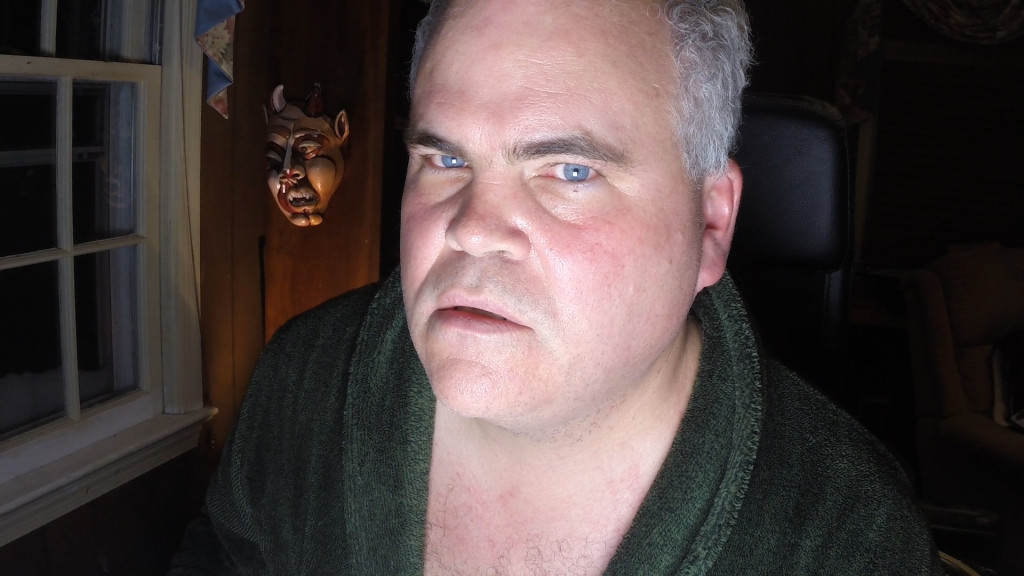 Note the carefully placed lighting on the mask in the background, which required both lighting the mask and using a flag, a dark piece of cloth, to block the light from hitting the window.

I also liked this shot, filmed on Sunday morning when the story had grown quite dark indeed. 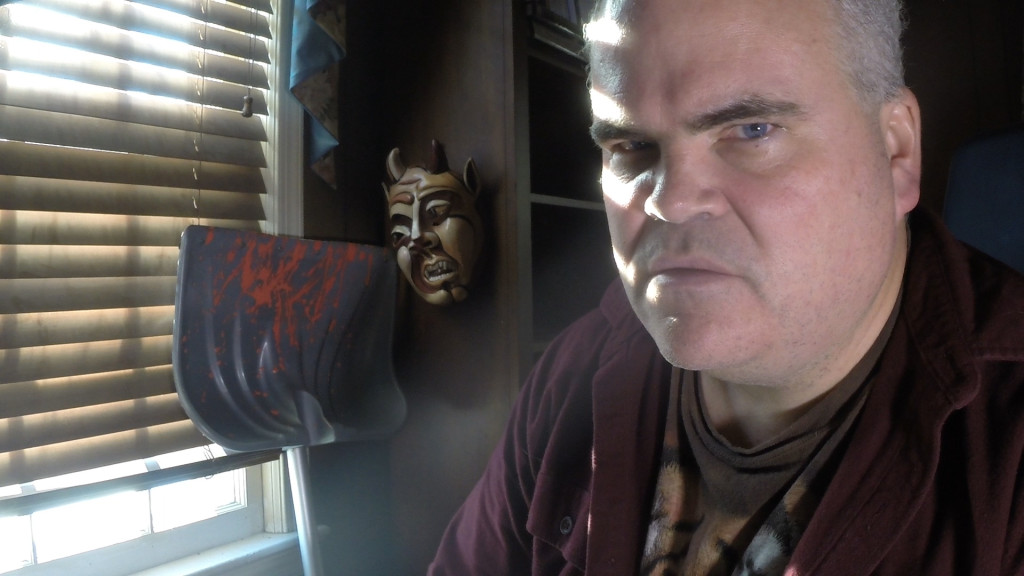 Getting those stripes of light on my face required careful positioning of my head.  We also had to flag the window light from hitting the camera.  And we had an additional light shining on my eyes to add to them the little dots of light – in film, they call that a “catch light.”

The penultimate episode was my tribute to “The Revenant.”  I figured if Leonardo diCaprio could win acclaim by sitting in the snow eating a piece of raw meat, I’d do the same.  So we got out a raw steak and filmed me eating it, then ranting. We did one take.  Blah – spit out the raw meat.  But the take wasn’t good enough.  So I did another.  And another.  And another.

I do like steak.  But not raw.  Still, it made for a good episode, though the first thing I did on going inside was to brush and floss.

Finally, it was time for the last shot.  Julie was going to be the camera operator, so I carefully designed the shot so that it would be fairly easy to get.  A slow pan.  Carefully place things in the way to be seen.  Pass over Smudge, eating my guts (something that I had set up in the previous episode).  Finish on a closeup on my face.  All one smooth take.

We put out all the things that were going to appear in the shot.  I brought the cat out – he wasn’t thrilled.  I smeared my belly with cat food, to tempt Smudge to eat, and ketchup, to look like blood.  And Smudge wouldn’t eat – the cat’s a little glutton, but he resisted this time.

We did three takes, me lying in the snow.  Then we went in.

And we hadn’t gotten the focus right.  So it was outside again, for another three takes.

On the last take, some geese flew overhead, honking away.  We caught the sound and it was perfect, especially when combined with other birdsong and with Smudge’s plaintive meows.  And somehow, Smudge had gotten a bit of cat food on his whiskers and he was licking it off, which made it look like he had just been feasting on me.  Perfect!

When I got inside and viewed that last shot, I started shrieking with joy.  And I did the last edit and published it to Facebook.

I view it as my own private 48 Hour Film Project, though strictly speaking it took me around 52 hours to do the whole thing, with plenty of breaks.  I even got my normal amount of sleep that weekend – it turned out to be a surprisingly unstressful experience.  Well, as unstressful as making a movie in a weekend can be, I guess.

It ended up being fifteen and a half minutes of video, broken into ten episodes.  There were things that could have been better, but overall I was happy with the result.  And now I view it as my ninth film, and the second that I did with no help other than Julie and one of the family cats.

You can see the whole thing here.  I hope you enjoy it – I certainly enjoyed making it.  It was a great way to last out the storm, and helped me from getting the cabin fever that my other self suffered.  The next time there’s a bad snow, I might invite a group of filmmaking friends to stay with us to make another film.